From the NYT… by Ashley Hoffman

CLAIRE HACKNEY and Bobby Smith made two playful touches to their wedding in 2008 in Boylston, Mass. First, as gifts for the wedding party they gave puppets made to resemble each attendant. 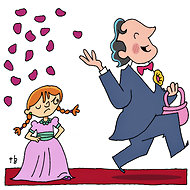 The second touch began with the theme from “Indiana Jones.” Guests turned around and saw something almost as unexpected as a groomsman with a bullwhip and fedora: a man in a dinner jacket acting as the flower girl. Dana Jay Bein, a college friend of the bridegroom, came up the aisle tossing fresh petals from a fabric bag.

“Bobby could have told me I was going to lay down on the appetizer table, and I would have,” said Mr. Bein. “but he made me a central figure instead of just one of the guys. I was humbled.”

He added that people came up to him afterward and told him that he had been “a beautiful flower girl.”

For her otherwise traditional Filipino Catholic wedding last October in Mountain View, Calif., Jen Fernando chose her friend Sean Hopkins, 37, to be the “flower fella.” “She thought it was the perfect way to represent our friendship because it was totally our sense of humor,” Mr. Hopkins said. “When it had to be approved by the priest, I thought that would be it, but he was tickled by the idea.”

The crowd at St. Joseph, a Roman Catholic church, cheered as Mr. Hopkins tossed silk rose petals onto the carpeted path from an onion-shaped basket wrapped in silver ribbon. “I was nervous,” he said. “When I took the first petals out, I saw my hand shaking and I heard whispers, but then everyone started laughing so I could let go.”

When Kevin Peterson was married to Marlene Maginot under a vine-draped wedding canopy at an event space in Los Angeles on April 16, the flower man, Drew DiFonzo Marks, 28, wore a navy blue suit with a paper flower pinned to the lapel.

As “Then He Kissed Me” by the Crystals blared over the sound system, Mr. Marks flung handfuls of petals from his pockets while he escorted the couple’s terrier on a leash. “I didn’t smirk or mimic the saunter of a little girl,” Mr. Marks said. “I just said, ‘I’m going to do this job.’ ”

As gender roles in weddings have gradually blurred, it is less rare for the bride and bridegroom to have opposite-sex attendants or so-called honor attendants. Still, flower guys have been slower to catch on, according to Joyce Scardina Becker, a wedding planner in San Francisco and the founding president of the Wedding Industry Professionals Association.

Ms. Becker estimated that 20 percent of her weddings today feature honor attendants like a best woman or a man instead of a bridesmaid, but flower men are more of a novelty. “It’s just very uncommon,” she said.

Chrys Ingraham, a sociology professor at the SUNY College at Purchase and the author of “White Weddings: Romancing Heterosexuality in Popular Culture,” said the idea of a grown man stepping into an identity reserved by tradition for a little girl was very unusual.

“The gendered wedding is breaking down, which is allowing heterosexuals to play with the stereotypes in a way they didn’t have permission to do before,” Professor Ingraham said.

She added that although flower men might bring on waves of laughter, they did not undermine the ritual.

“You can play with the traditional mold, but in the end, you’ve had a wedding,” she said. “Whether you do it on the back of a motorcycle or underwater, it’s the same thing.”

Robert Heasley, a sociology professor at Indiana University of Pennsylvania and the president of the American Men’s Studies’ Association, said weddings were one of the last institutions to hold on to strict roles for the sexes, but that they were changing.

“We continue to have the marriage ceremony, but we’re slowly changing it to represent the greater balance of the genders,” he said. “It’s a significant shift to have the male be the flower girl because it introduces a male who represents gentility, flowers and femininity. It’s just another step toward the dismantling of the patriarchal formation of the marriage.”

Typically, the flower girl settles for a few compliments in the bride’s shadow, so it can be tricky for a man to manage the task without upstaging the bride.

“They knew I wasn’t going to take the spotlight away and that I could make it funny without it being a joke,” Mr. Marks said, referring to Ms. Fernando and her bridegroom, Michael Mackinder. “As a best man, I had given a speech and nobody came up to me. But when I did the flower-boy thing, everybody congratulated me on how I handled it. I didn’t realize I was going to get credit.”

This article has been revised to reflect the following correction:

The Field Notes column on June 26, about men taking the place of flower girls at some weddings, misstated part of the name of the organization of which Robert Heasley is the president. It is the American Men’s Studies Association, not the American Male Studies’ Association.