Several states came to the Supreme Court this week asking for one last chance to fight against marriage equality.  The justices sent them home, unheard. The end result is that a lot of states where people had voted against marriage equality will no longer have a say in the matter, and that’s ruffling some feathers. They huff and puff “but we voted! It’s the will of the people!” They end up the victims in their narrative somehow, and that’s irritating.

The Constitutional rights of others can’t be decided by a vote. That’s the long and the short of it. The conservative states that are flipping their wigs need to get a grip 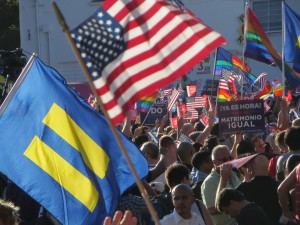 The victims here are the gay couples who had to address their grievance through the courts in the first place. Some couples fought these laws for ten years, making their way to the altar slowly but surely. People say wedding planning is challenging. I’d say compared to these couples we don’t know what that even means.

Congratulations and best wishes to everyone who is getting married in the next few days. Idaho, stay strong. No equality in your state yet? Hang on. We’re spreading the love, America…and as the saying goes, love conquers all.

Be well and love well.