From Yahoo Sports – possibly the sweetest Prom story ever.  We couldn’t have come up with a better way to wrap up the season than an eighth grade Cinderella swept off her feet by a brand new Bear with a big heart.  Much respect to Mr. Thomas for being a mensch and for, as he was quoted on the decision to follow through all the details including the corsage,  “keeping it traditional.” 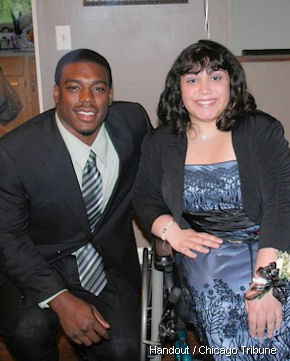 J.T. Thomas(notes) was drafted in the sixth round by the Chicago Bears, but the lockout leaves him without much to do right now. The athletic, hard-hitting linebacker out of West Virginia University is still in Morgantown, keeping in shape and spending time with his family.

Every day, Thomas helps his 7-year-old brother Jared get home from school. Riding the same bus as Jared is an eighth-grade girl named Joslyn Levell, who happened to grow up in Chicago as a Bears fan and now lives in Morgantown. Joslyn has spina bifida and uses a wheelchair.

With assists from the bus driver and J.T.’s stepmother, Thomas got on the bus one day to say hello to Joslyn. They hit it off immediately. From NFL.com:

As J.T. met a Bears fan in his hometown, Joslyn explained to him that she’d had a rough week because all of the boys she asked to the dance declined. Thomas melted.

“I hugged her and signed a few things and we talked for awhile and she cried a bit,” Thomas recounted. “I gave her a hug and told her everything would work itself out.”

It did. J.T. asked her to the dance himself.

“I was nervous that by the time I reached out, she might have had a date and would have to turn me down,” he said.

“After so many people turned me down, this was so big especially, because he asked me instead of me asking him,” she said.

How’d the evening go? Check out some of Thomas’ tweets from that evening:

Why am I getting nervous for an 8th grade prom??

The DJ is slowin it down…couples only!!

Joslyn later said it was the best night of her life.

Thomas intends for his new friendship to continue, too. If things work out for him in Chicago, he said he’d love to bring Joslyn and his family back to Chicago to see him play for the Bears.

Follow Yahoo! Sports on Facebook and be the first to know about the most interesting stories of the day.